The breakthrough in technology has brought a whole new range of tool suite for developers to make the software development process more efficient. React App is among one of them! A prominent tool recommended by the React community to create single-page applications (SPAs) and also get familiar with React.

React App ensures that the development process is refined enough to let developers leverage the latest JavaScript functionalities for better experiences and optimization of the apps for production.

It is a prominent toolchain for building apps quickly and efficiently.

This blog will showcase how to create a React app from scratch.

Virtual DOM : The most important and biggest feature introduced by React is Virtual DOM. In react, as a developer we work with Virtual DOM instead of working directly with Real DOM.

Components : : In react, every application UI is broken down into Components. Component is the most basic building block of the Application UI.

JSX : JSX stands for Javascript Syntax Extension. React uses JSX for building templates instead of regular JavaScript. It is not necessary to use it when we are working with React but JSX makes React a lot more elegant. This feature makes it much better than many other frameworks out there today.

Below are the steps which you have to follow to create you react project:-

React project folder contains some initial files and folder which is as mentioned below. 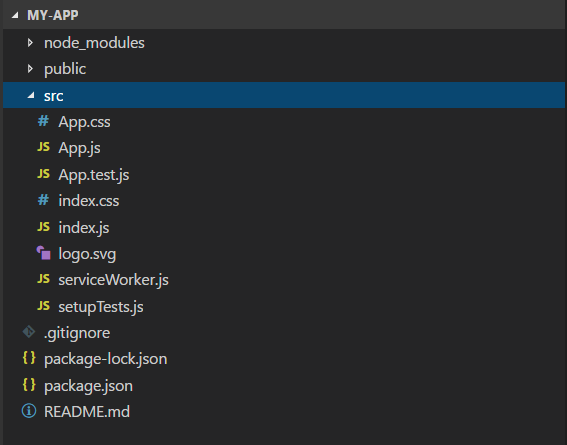